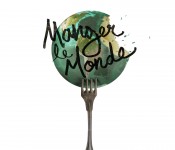 Bruno is back for a second season of Eating the World after visiting Southeast Asia and this time we follow him in India, Philippine and Columbia.
During this culinary adventure, Bruno goes a step further with the people he meets and takes his curiosity
to another level in order to taste new dishes and discover other cultures’ ways of eating.
By seeing locals and flamboyant people amused by Bruno Blanchet’s extravagance, once again viewers travel through dishes and learn a little bit more about what people are eating around the world !

Bruno Blanchet, lover of fine foods and globe trotter emeritus, has a good nose for finding unusual foods whether it be on the streets, at a neighbour’s house or a restaurant.
In « Eating the World », Bruno shares with viewers culinary discoveries made through wonderful encounters. He cooks with locals typical meals from the regions he explores. As he learns, he offers viewers the answer to the question « what are people eating around the world » and gives them a taste of Southeast Asia to put in their plates!